Most all remote control switches made for O27 did not come with the no d rail feature. This is a feature automatically changes the switch position when a train is approaching the switch if the switch is in the wrong position. The second-generation Lionel 1122 switches, made I believe in the late 40’s did come with this advanced feature. To the best of our knowledge, this was the only switch Lionel made for O27 until the late 2006 when K line released some of their products to Lionel allowing them to market some of the K line products with the Lionel name on it, including some switches. The other item that is missing in most O27 switches is the ability of wiring the switches for accessory power. This is an important feature, because without it as you slow the trains down to go thru the switches, the power is also reduced to the switches where they will not operate correctly or in some cases at all.

So, why the big opposition on behalf of Lionel and other manufacturers to include this feature for all their remote control switches? Personally, I believe it was because the wanted to keep the more deluxe features exclusive to the more expensive O gauge line, or they simply did not think of it. In the manufacturing process it would not have been a big deal to include these features.

Last year we started modifying many of the O27 switches we sell to include both the No D Rail feature and the ability to operate from accessory power. These new designs were accepted very well and as a result, starting with the 2018 season, virtually all the remote control O27 switches we sell will include our no d rail feature as well as the ability to be powered from accessory power. Exactly what we need supply to accomplish the No D Rail feature, varies from switch to switch as well as how you will wire them for accessory power. All the various switches come with complete wiring instructions.

When we add the no d rail feature, what happens is that when a train hits the no d rail activation point it activates the solenoid to change the switch. This solenoid will stay activated until the train passes thru. If you park a train on that point the solenoid will stay activate constantly, not good. A solution was found for this by some a really smart guy named ROB NELSON almost 15  years ago.  We took his  solution which was  adding a cd (capacitive discharge circuit to the controllers) and now we include this feature on all O27 switches that require it. We did need to modify his original system somewhat, because our controllers work with 2 switches simultaneously. 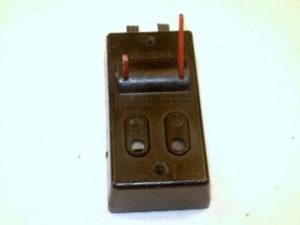 With our new advanced controls that show which direction the switch is turned to with huge LED’s : 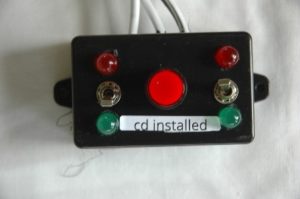 All our switches and controllers we produce now carry a full two year warranty. All of our O27 switches are sold in groups of 2, 1 left hand, and one right hand switch. If you need to change to for example 2 left hand switches no problem, just let us know via email. 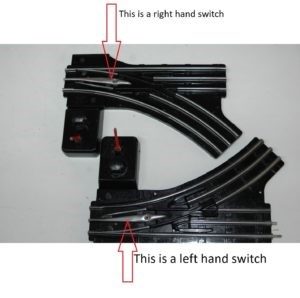 These are the Lionel 1121 switches. We refer to them as our “hump-back” switches. These have proven to be very durable switches with really quick actions once they have been modified. To achieve the No D Rail feature it is necessary to install the additional tracks as shown. They may come with full size tracks vs the ½ shown. These switches also come with our new CD controller,  and are modified for accessory power. 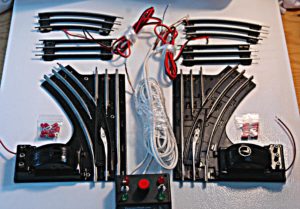 These switches may carry the Lionel or K line brand. They are the 65121 switches. Most  of those produced did have the No D Rail feature built in, and therefore no extra tracks are necessary They were originally made by K line, and are a nice quality switch. They  have a very visible green or red flags on the switches. Some have 5 screw downs (which means they will not require the cd option) and will come with a slightly different controller. Those switches that come with 3 screw terminals we will include the CD controller at no cost. And are wired for accessory power 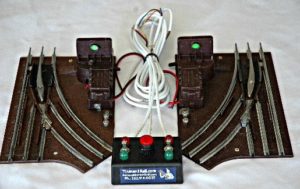 These are the Lionel 1122 series switches. These are very nice switches but require extensive modifications to make the accessory power work, which we do provide at no additional charge. There are several versions of these switches and most do have the built in no d rail feature. If they do not, we will supply the necessary extra tracks at no extra charge. These switches also include the CD controller at no extra cost. 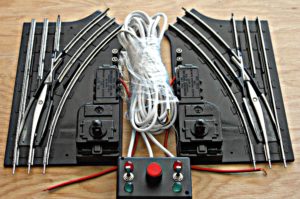 The below are some late generation Marx switches and are very durable and well built. Most are a wider radius (O34) than normal O27 switches. They will come with No D rail feature, will be wired accessory power and CD  controller

These switches were made by Marx, and are all metal, with very dependable operations. They came in a variety of colored ‘boxes” and some even had small boxes on the tops which were supposed to show the red and green colors, but never worked very well. Unless you specify otherwise, we will not sort the switches we have, except they will be matching pairs.The later model switches came with a hole in the side of the top for the purpose of shooting in some motor oil to make the switches run smoother. On all the switches we sell we make sure they also have the holes, because that little change does an incredible job of keeping them work great. No worries, when you get these switches they will have both the No D Rail kit and the new CD controller. If you are a Marx Purist, we will of course substitute the original controller as shown. Just let us know.

This is an late model of their wide radius (O42) switches. The newer ones came with a different type of flags to show the direction the switch is turned. Your switches will of course come with the advanced controller, but without the cd system installed, because these switches do not need them.The Kline switches might not come with original boxes. They will come with the no D rail feature 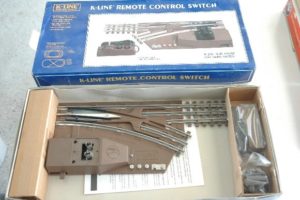 These are the Lionel late model 1022 manual switches: The flags turn red to indicate OOOPS better switch the switch. 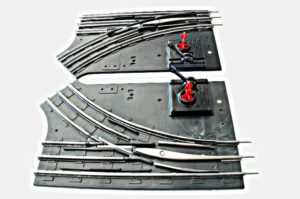 These are the Lionel   manual switches with red flip levers that were not made in great numbers but are a really nice switch and do have an illuminated lantern, that works well. 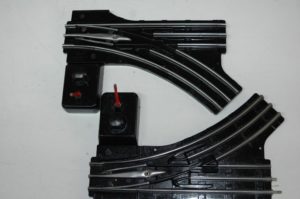 Another Marx set of switches, these are part of their last made and are a really good switch:

One of the best looking switches we have seen, and works well. The indicators are very easy to see and do not have light bulbs. K Line/Lionel brown plastic manual switches. They are nice looking late model manual switches. 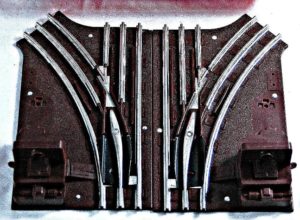