What the heck is the difference
between O Gauge and 027?

First, the specs. This chart shows the dimensional differences between 027 and O gauge tracks. 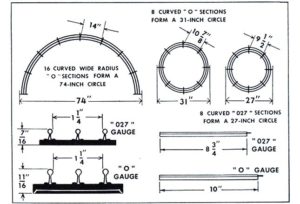 As you can see, there is no width difference between O gauge and 027 gauge tracks.

Q: So does that mean that all O gauge rolling stock (locomotives and cars) will run on 027 tracks?
A: Nope, not necessarily, because many of the O gauge rolling stock is much longer than similar looking 027 stock, and cannot make the sharper curves of the typical 027 tracks. If the 027 tracks were only used as straights, then it would not be an issue however wide-radius O27 curves and switches are available. which will allow most  O Gauge rolling stock to work fine.

Q: What is the difference in 027 rolling stock versus O gauge?
A: Theoretically there should not be any difference, but in actuality, 027 rolling stock is significantly shorter than O gauge. This supposedly was done to support the sharper curves of 027, but personally, I think it was to keep the costs lower on 027 items.

Q: Why did Lionel come out with 027 tracks and rolling stock?
A: Competition, primarily. At the time, Marx, American Flyer and Ives were only producing 027 products, which were priced much less than Lionel’s O gauge. 027 sets were very popular with Christmas shoppers looking for relatively inexpensive starter sets.

Q: Is there any advantage to 027, then?
A: Yes, 027 layouts can be made much smaller than O gauge, due to the sharper turning radius. Overall, you get more bang for the buck with 027 than O on a smaller layout. A 4 by 8 sheet of plywood can easily support several loops of 027 runs.

Q: Can you mix the two sizes together on a layout?
A: Yes. At one time Lionel made special adapter pins. Now most people force O gauge pins into a piece of 027 track, and add a 1/4” spacer under the 027 track to bring it up to the same height of the O gauge track. I have several K line 042 switches that I use on my O gauge layout, and they work quite well.

Q: Can 027 tracks of different manufacturers be used on a single loop?
A: Sure.

Q: What is the future of 027 track, switches, etc.?
A: To the best of my knowledge, there are no manufacturers currently making 027 tracks. But in all fairness, there also is no one making O gauge tinplate track anymore. However, ample supplies of good quality used tracks are still available. In 2016, TinMan3Rail.com has made a commitment to support the supply of 027 track and switches. We even offer a complete line of “TinMan’s Favorite” 027 track. I do not foresee inventory issues for many years to come. Prudence dictates that we be more careful in storing our 027 track collections. Fortunately, “TinMan’s Favorite” is protected from rust and corrosion significantly better than the typical tinplate. With just a minimum amount of care, these track pieces will work just fine for your great great grandchildren.

Q: Ok, just starting out which do I go with O or O27
A: In my opinion the most important thing is how much real estate you can dedicate for your layout. If you have a limited space, for example 1 4X8 sheet of plywood, absolutely go with O27. If you can do say 4 sheets of plywood, consider O. Couple years ago I would have said O27 is a lot cheaper. With nothing new being manufactured anymore I think the price of O27 Track and accessories will be going up, narrowing the difference between the 2.